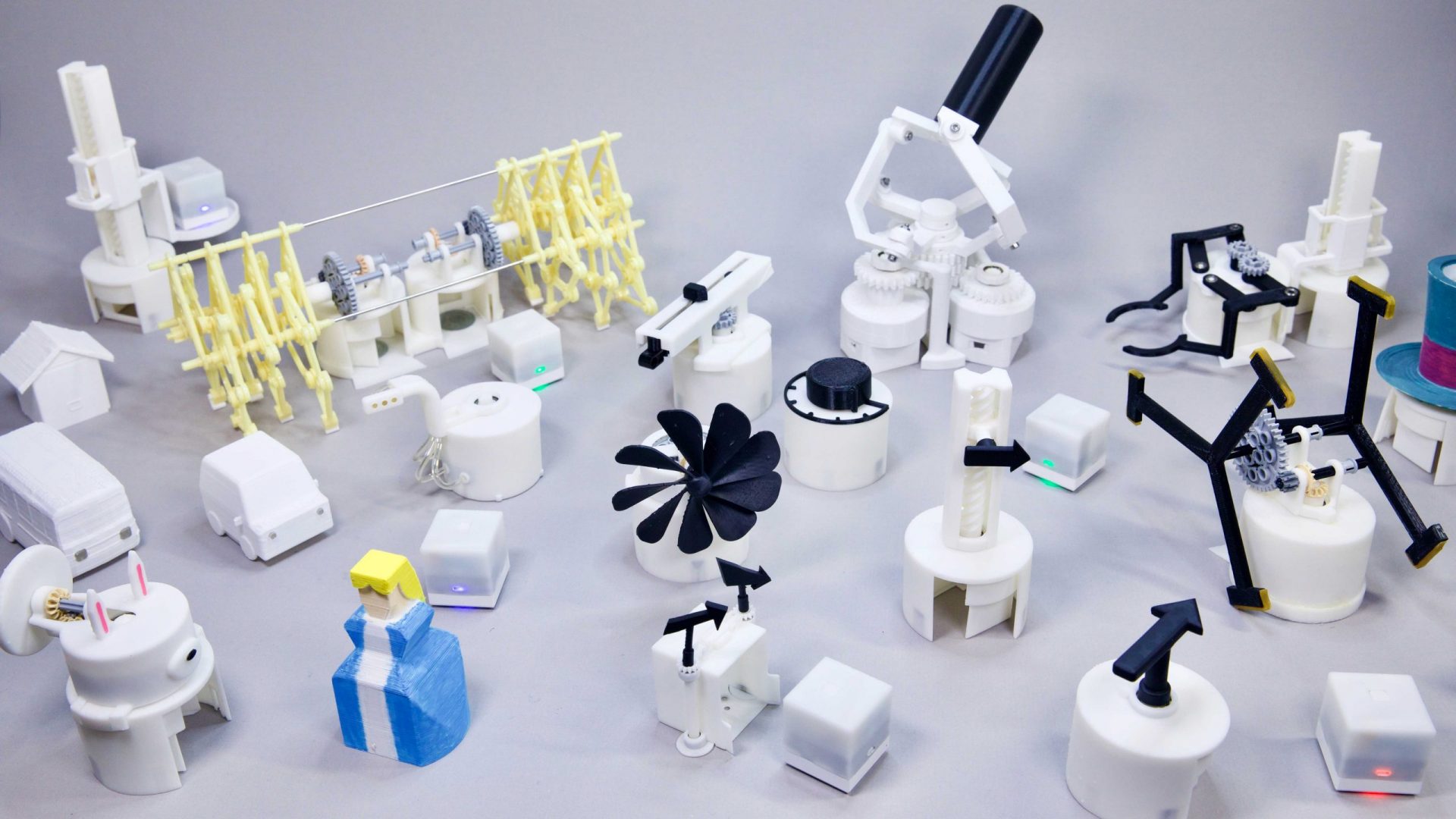 The design world has always taken inspiration from our surroundings: animal behaviours, nature, and people. Robotics design engineering has often tried to emulate humans’ and animals’ characteristics, using them to create, through similar concepts, technologies that can aid our daily life.

A great variety of habits have been observed in the animal world, emulated and mastered through robotics. One example is the hermit crab. This animal, whose size increases gradually, can leave its shell to find a more comfortable one.

The hermit crab lifestyle inspired the latest MIT robotics lab research: HERMITS is a prototype of small robots able to interact with different accessory systems to change and enhance the function they are programmed for completely.

As the name suggests, this new, little technological innovation uses an existing robot toy launched by Sony: the Toio platform, a system composed of small cubic robots on wheels and remote controllers. The Toio cube robots have a fairly simple system. They do not use AI technology to communicate and function. Instead, they work via Bluetooth, connecting to a console capable of sending impulses to tell the small toy how to behave: moving at different paces, spinning around, or speeding.

What is extremely interesting when it comes to this technological toy is that it comes with a book of paper cutouts that can be attached to the tiny robots to mimic the gliding of a snail, a person walking, a crab claw, or other playful movements.

MIT’s Media Lab seems to have taken this idea a step further by taking the Toio wheelie robot and slightly modifying it to improve its functionality. Ken Nakagaki, a fellow MIT’s Media Lab roboticist, implemented the existing robot by adding a very simple closed-loop servomechanism that can use position feedback to control the way it moves and functions; this very basic servo enables the robot to pop a pin in and out from its top, allowing attachment and detachment from a “docking station.”

The most ingenious part of the HERMITS crab robots is developing further an existing technology to change and improve its functionality. A very similar example could be what happened very often with mobile phone companies, releasing almost every year a very similar device with some improved functionalities and assets that still run on the same principles.

HERMITS not only updates the Sony model to change its functions slightly, but it does something very peculiar in robotics. It makes a specialist robot behave like a generalist.

The majority of robots today are considered specialists, i.e. they are programmed and built to fulfill a certain task and perform a certain set of functions. On the other hand, generalist robots are more complex and less common due to their intricate technology involving adaptation to situations and the environment, harder to achieve and engineer. MIT’s Media Lab has investigated an untapped robotics field. It created an escamotage to design a specialist robot that can perform as a generalist, saving on sophisticated AIs and complex mechanics. The HERMITS project is founded on two elements: the modified Toio robot and a set of passive structures, similar to the Toio paper cutouts, which can perform different tasks if activated by a motor.

This approach is highly flexible and versatile; the cubic robots can dock inside the passive structures and attach and detach from them on demand; once attached, they activate the passive structures, or shells, that perform more complex and diverse tasks. Thus, the “improved Toio cubes” become a robotic technology that can interact with the different passive structures to transform their general use into specialised ones. At any point, the wheeled robot can disengage from one shell and engage with another.

The shells could potentially be performing a huge amount of functions; some of the ones tested by the MIT’s Media Lab are fan shells able to blow air, knob and slider shells, two-degree of freedom rotation shells or vehicle and traffic-light shells. The system also allows for more robots to cooperate to achieve greater performance and a stronger resulting force allowing other types of shells like a robotic gripper, haptic joystick shell, a linear force accumulation shell or a lift shell to be produced. The MIT’s Media Lab combined multiple of these shells together, showing different prototypical scenarios of how this system could be implemented, for example, recreating a tangible mobility simulator or an animated storytelling performance.

A great potential could be already foreseen in such a system: even though these shells and robots are at a prototype level, they could be easily scaled up to be employed in real-life scenarios. It would not be a long stretch to imagine a linear force accumulator shell used in a warehouse to move goods or traffic light and vehicle shells to be the new future of mobility.

The HERMITS project should be of great importance for the robotics world because it conceives robots able to mutate functions without actually adapting to the situation, simply using a shell-docking system. Prototyping through the method used by the MIT’s Media Lab, i.e. creating a robot formed of separate pieces and alone-standing parts, means that each element could be designed, tested, and produced separately, a groundbreaking methodology in today’s technological production.

HERMITS shows the great power research labs have in producing and testing new technologies. Companies like Sony or governmental subsidised organisations often experiment on technologies according to what the market dictates or what would return a greater profit, but these reasons do not constrain a research lab like MIT’s. Experimentation within academic research laboratories is essential to bring on the table original and innovative technologies.

MIT’s Media Lab is one of the most renowned organisations in research and academia; it sees professors, researchers, and students working together and collaborating with designers, artists, and scientists to create innovative designs true to their motto: creating technologies and experiences that can transform peoples’ lives. Plenty of the projects investigated at the MIT facilities often grow out of it to be acquired by companies or displayed in exhibitions. This emphasizes the relevance of the HERMITS robots and the other ongoing investigations research labs are carrying out.

The HERMITS crab shells are extremely relevant for the development of our technologies. It is a project that brings simplicity to very complex ideas separating the final product into smaller and individual elements; it shows the importance of cleverly prototyping to save money, energy, and time and gives a clear idea of the potential in modifying existing technologies to improve their functionality.