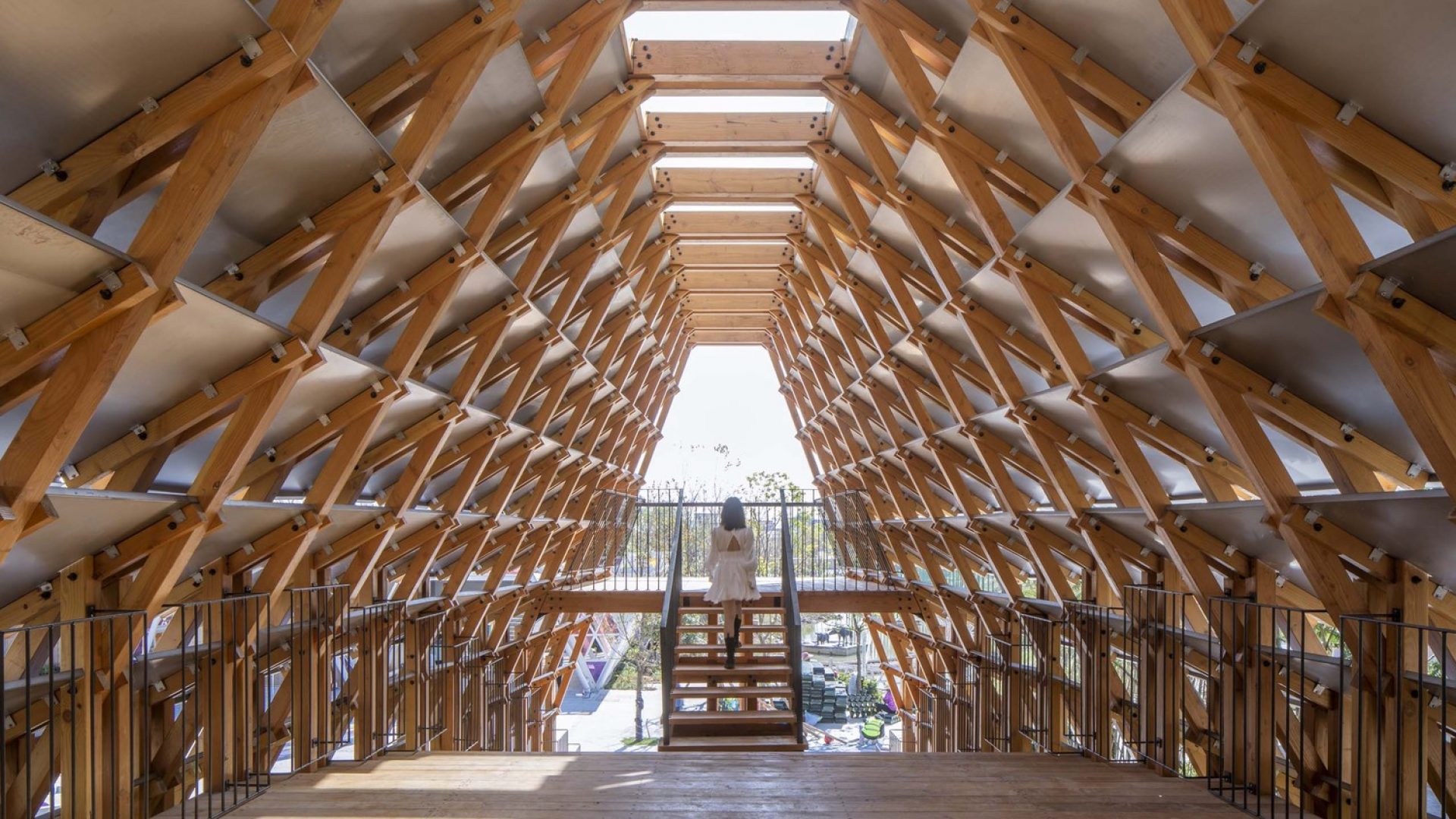 Crossing The Gulou Waterfront Bridge: Between Traditions and Innovation

Sometimes design can grant an experience, sometimes it performs efficiently, and some other times its construction is elegantly envisaged. These three elements are rarely achieved at the same time in a project, but LUO studio demonstrated it is possible.

The architectural studio based in the “Art district” of Beijing has realised a space that serves as a bridge but allows simultaneously people to appreciate the surroundings of the site and the intricate craftsmanship of this piece of infrastructure.

The Gulou Waterfront bridge constructed in 2022 is fully made out of timber and it represents one of the many bridges crossing the canal network that flows through the new eco-cultural tourist resort developed by OCT. This resort promotes cultural heritage and preserves a unique landscape through educational activities both for children and adults about the history and customs of the area.

The most remarkable aspects of this project are its craftsmanship and the way each component fits in place almost effortlessly, hiding a complex analysis and construction study that allows this piece of infrastructure to be as charming as sturdy.

The primary structure is composed of three arched beams at the bottom of the bridge supporting the live and dead load. The arches are placed 2.8m apart from each other and have a section of 600x300mm. In order to facilitate construction and transportation of the timber elements, each arch is divided into three components which were assembled and bolted on site. Despite the rounded appearance of this sophisticated piece of infrastructure, the arched structures are the only curved elements of the Gulou Waterfront bridge.

The secondary structure supporting the main beams is composed of small pine wood components of 100x100mm and 100x50mm interlocked with each other and bolted to the primary structure. Each smaller component is positioned in such a way that combined with the upper layer forms a triangulation that helps the stability system of the bridge and creates a further intricate aspect in the design.

The bridge presents a permeable skin, that was easily transported and assembled in situ, composed of 900mm metal panels latched on the smaller wooden components protecting the timber from the weather and allowing the bridge to be a space for shelter from the rain. Concurrently, the design of the skin does not block the view; on the contrary, it enhances it by reflecting the shimmering water movements and creating a game of lights for the visitors to enjoy. This ingenious feature creates an evocative walk through the bridge, and it augments the functional difference between the banks of the canal: on one side hosting commercial buildings and on the other side the children’s playground area. LUO studio transforms crossing a bridge into an experience between tradition and innovation.

LUO studio transforms crossing a bridge into an experience between tradition and innovation.

The 25.2m long bridge creates a clearance passage for fishing boats and small touristic ferries to pass under with a clearance of 4m higher than the water level of the canal. The Gulou Waterfront is only one of the bridges planned for the new eco-resort; all of this new infrastructure aims to promote and celebrate the old Chinese custom of constructing villages around canal networks and making them accessible through bridges. This considerate practice does not disrupt the fishing boats moving along the canals but it still allows visitors to move freely around the area.

The bridge is capable of encapsulating the culture and history of the town at many levels: by re-proposing the use of arches as the primary structure of a bridge, widely employed in the historical construction of Chinese buildings: by utilising wood as the main material for the bridge (abundant in Southern China) and by proposing a bridge that resembles a covered corridor (a recurring technique in Chinese culture).

LUO Studio’s intention was to design a piece of infrastructure that was something more than a bridge; the architectural practice longed for the Gulou Waterfront bridge to be a collection of special moments carefully crafted. The space is designed in such a way that a visitor crossing the covered corridor can catch glimpse of the shimmering water underneath, through very small gaps in between the wooden components of the bridge.

LUO studio also added two viewing platforms; these are attached to the lower arched beams through connecting rods. The platforms serve as both stability systems and as extraordinary spots for people to appreciate the landscape of mounds and canals of Gulou in Jiangmen City that were artificially created for fishing and farming. To arrive at the platforms the bridge morphology presents a change of height that is taller at the entrance of the bridge and lower in the middle; mirrored on both sides, the same change of height happens on the other end, generating a dynamic walk that enriches the variation of views visible from several points on the bridge.

This fine piece of infrastructure becomes a symbol of the transition and coexistence of local communities, cultural heritage, rural development, contemporary design and eco-tourism. Its design solutions are very thorough; for example, calculating the width of the components to be the exact size of the standard length of three steps and in doing so creating a smooth and visually delicate space. The structural engineering is naked, becoming the beauty of the space and showing the effortless intricacy of the design.

Luo Yujie, the founder of LUO studio, has combined his teaching skills at the School of Architecture, Central Academy of Fine Arts (CAFA) and his creativity as a practitioner, to produce a piece of infrastructure that bewilder the viewer through its complexity and sensitivity.