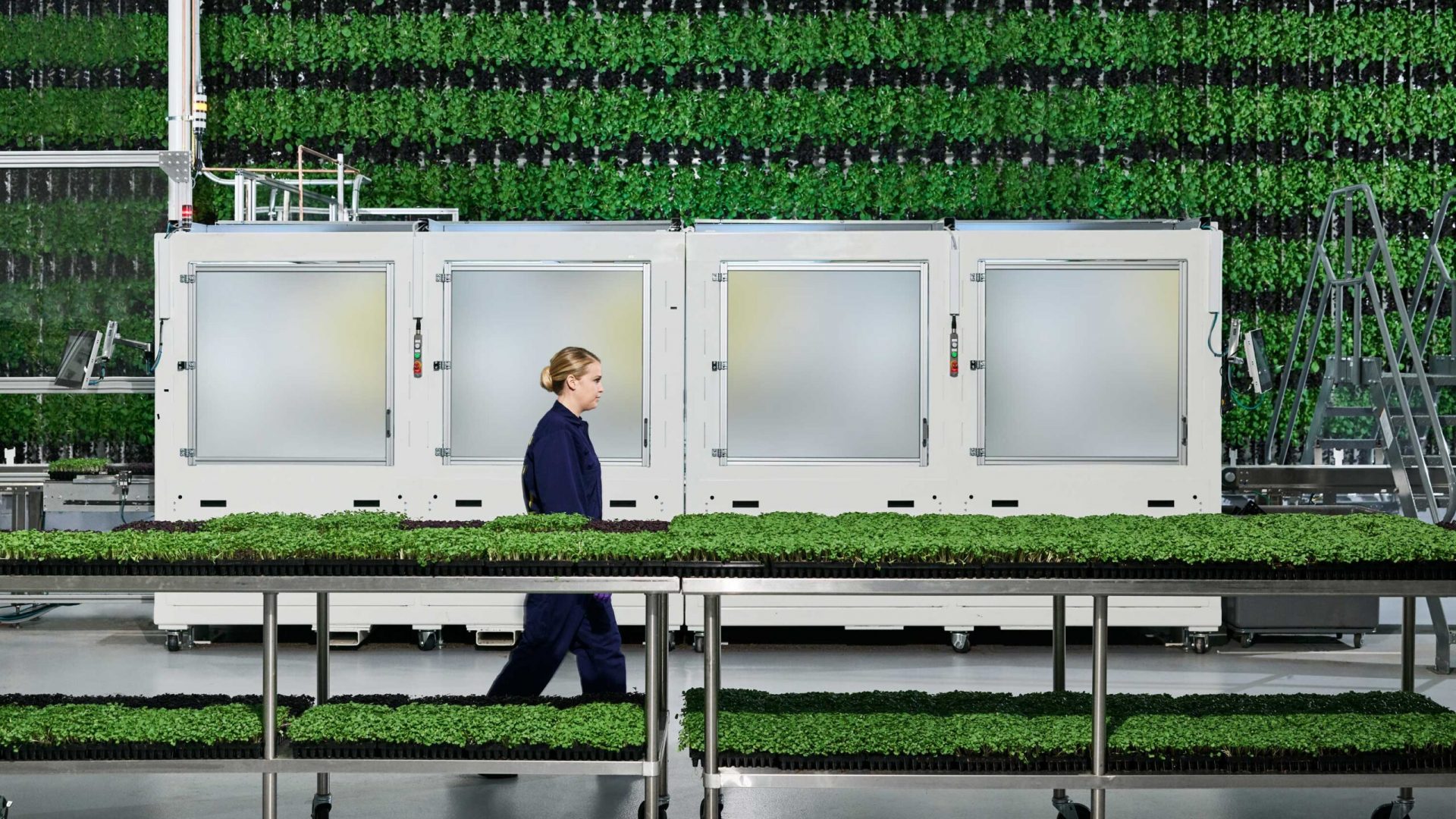 Plenty is an agricultural-tech start-up specializing in vertical farms controlled by robots and monitored by artificial intelligence that could change the way we farm, buy vegetables and face the future.

To understand how this company could be the key to how fruits and vegetables will arrive in supermarkets and how the world will face an increasing demand for food, it is crucial to understand the concept of vertical farming.

As a practice, vertical farming is still a fairly new business. Its concept pivots around the idea that with the advancement of industrial development, strong urbanization, and climate change, the amount of arable land available on Earth will decrease each year. Large losses have happened already in the last 50 years.

On top of these territorial issues is the increase in world population, thus creating an unprecedented food demand. National Geographic has predicted that by 2050 the Earth will see an additional two billion people to feed, but the available farming land is not increasing but rather depleting.

Vertical farming lies in between these two issues. Through creative thinking, it has brought forward a solution capable of alleviating both situations, increasing efficiency, production, and quality, and decreasing land and water use.

The practice of vertical farming, as the term suggests, consists of growing food vertically and in general on multiple levels. Towers or warehouse-like structures are integrated with vertically stacked layers. These buildings can host and foster plant growth through aeroponic, aquaponic, and hydroponic methods or with non-soil mediums such as peat moss or coconut husks.

This sector is beginning to develop fast, and it has projected growth in the U.S. alone of more than 24% until 2024, with a revenue of $3 billion. In the U.S., customers can already have access to groceries grown from the 23 large vertical farms in the country, supplying more than 20 supermarket chains.

With these conditions, the company Plenty has been thriving and expanding its business. This start-up, making an entrance into the market in 2018, can produce 400 times more greens and vegetables per acre than a regular farm in the same region.

The key to their success resided in employing technological advancements in their facilities’ growing and farming methods, which will give better crops and faster production. The company has pushed the boundaries of what vertical farming can do, demonstrating how this is a solid option for the current demand for arable land

AI implementation in farming gives the possibility to cultivate healthier and more abundant crops with technologies that control pests, monitor the soil and plants’ conditions, and organize data for workers to know exactly how to respond, resulting in a less labor-intensive workload.

Plenty can grow food all year round as the technologies employed can mimic and intensify the light and temperature conditions for a plant to have maximum yield. This smart system has aided in the start-up’s efficiency and output. Beyond improving the quality of its crops, it employs 95% less water and 99% less land than a standard farm.

Nate Storey, one of the start-up co-founders, shares, “there are five places in the world where you can grow fresh fruits and vegetables really economically, and all of that land is used up at this point. Vertical farming exists because we want to grow the world’s capacity for fresh fruits and vegetables, and we know it’s necessary.” This is the core concept of vertical farming: creating suitable conditions so that even plants not native to a region can grow continuously despite the weather. It is an architecture able to subvert the laws and rules of nature in order to make food available and local to more people.

This is the beauty of the San Francisco-based agriculture-tech company. Their facilities have the potential to be implemented everywhere in the world, in any type of fabric, rural or urbanized. Plenty’s farms would free farming from the constraints of seasons, bad weather, and natural disasters, creating food that does not require pesticides to grow healthily.

The first farm built by the tech start-up is based in San Francisco, and while producing 720-acres worth of vegetables, it occupies just 2 acres of space in the city. The vertical farm is made up of many rows of plants layered horizontally and vertically within the facility as well as hanging from the ceiling. Their health is controlled by robots moving them around to provide optimal conditions, while artificial intelligence manages watering amounts, temperature, and light (composed of artificial LEDs that mimic the sun).

Through CEA (Controlled Environment Agriculture) technologies, the company can control indoor environments and analyze each plant’s data to learn and improve the methods of farming, to grow healthier and bigger plants each time. In this way, the time needed for crops is shortened, and a much more increased yield production is achieved.

A smart vertical farm looks more like a high-tech manufacturing lab rather than a countryside field: there are robotic arms grabbing seedlings and planting them around in tall towers and platforms. After just ten days, the robots can cut the plants and restart seeding. In this way, Plenty’s facilities guarantee their products are healthy and pristine, all the areas are hyper-clean environments, and their employees work with protective equipment, where all of the robots monitor, harvest, and pack the vegetables, making sure that the first time bare hands touch the plants is once they are purchased and consumed.

Plenty’s farms are smart and considerate towards the use of energy and their carbon footprint: the small amount of water used in the whole farm comes from recycled water and evaporates water. Moreover, the facility is fully powered by renewable energy, a great achievement for the overall energy efficiency of the city.

Vertical farming in general, due to its proximity to urban areas where the products are sold, drastically cut down the shipping traveling distance, lowering Plenty’s farms’ carbon footprint and removing millions of tons of CO2 emissions from the atmosphere.

The tech giants of the world: SoftBank, Amazon, and Eric Schmidt, former Google chairman, have already invested a total of $400 million in Plenty, while Albertsons stores have already made a deal with the farming company to supply 430 stores in California, supporting the validity of this smartly-enhanced design of vertical farms.

With the success of the first Plenty’s Vertical Farm in San Francisco, their research and development farm in Laramie, Wyoming, and the collaborative partnerships with companies like Walmart, Ralphs, Whole Foods, NASA, and Nike, to name a few, the start-up is opening a third facility in Compton, CA. This new location aims to bring fresh food in and around the city in California to lower their vegetable import.

This new vertical farm would be the largest so far, condensing 700-acre worth of production in just 95,000 square feet, corroborating the goal of farming efficiently and productively in urban areas. The company will also be able to create new job opportunities in the area employing 50 local workers. In addition to that, Plenty will donate part of its products to organizations helping fight food insecurity in the region as it did in 2020, partnering up with Alma Backyard Farms, which was able to distribute meal kits to the local community during the pandemic.

Plenty’s smart vertical farms can help create a stable and increased food supply for the future. Crops can grow all year round uncompromised by seasons and use decreased amounts of water while avoiding pesticides and chemicals. This lowers the chances of developing diseases and does not interfere with the flora and fauna of the territory. On top of this, smart facilities such as Plenty’s lower workers’ hazards and risks that are often associated with the use of heavy machinery and chemicals in pesticides.

Vertical farms do not come without issues, and it is crucial to understand some of the difficulties and disadvantages involved. As is intended from the large capital invested, building these facilities is very costly and the technologies employed are relatively new, allowing for errors to occur. While seeming very efficient at regional and local levels, the facilities’ production scale at the national level has still to be tested in both its economic and productive feasibility. One of the most problematic parts of vertical farming is their hermetic facilities lack insects that could pollinate the plants, resulting in costly, labor-intensive manual pollination. Vertical farms like Plenty rely their whole chain of production on energy and electrically powered machines, so even one day of power loss in the facility could be devastating for the health and growth of the crops, generating high and unexpected costs.

Despite the difficulties vertical farms face, Plenty has been capable of addressing several of them, designing a duplicable and sustainable system that bridges food and technology thanks to the intercrossing cohort of growers, innovators, engineers, scientists, artists, and plant lovers. Plenty seemed to have set the first footstep in the direction of bringing smart technologies in one of the oldest industries of the world, and many other companies are following their examples by smartly hybridizing their productions.

FarmWise, for example, has been implementing its crops with smart robotic tractors able to cut weeds and pick mature vegetables through cameras underneath the machines. Similarly, educational and research institutions like the University of California are contributing to the problem of food and land scarcity, developing crops able to tolerate higher temperatures and that do not require long periods of chilling days in winter. These organizations are helping accelerate agricultural innovation and decreasing several environmental issues connected to farming practices.

Plenty’s mission seems to be proceeding and developing fast, and to bring their products even closer to the consumer, the company has developed a feature on their website: Store Locator showing all of the stores selling their AI-grown vegetables that are free of pesticides, locally sourced and in fully recycled packaging.